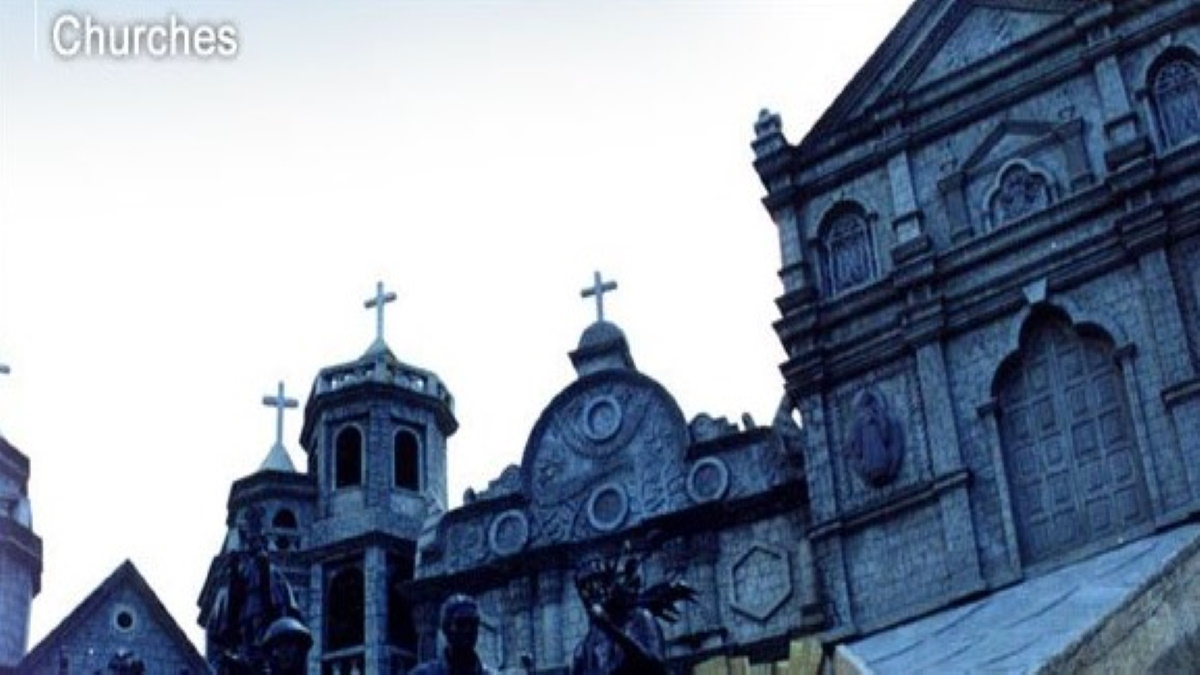 Manila Cathedral is actually the eighth cathedral to have been built on this site, the earlier ones having been destroyed by earthquake, fire, or war (including an almost compete destruction during the Second World War).

In its first years (1571-79), the site of the present-day Manila Cathedral was a parish church known as the Church of Manila and it was governed by the diocese of Mexico.

In 1581 the first Manila Cathedral was built and consecrated on the site of the former Church of Manila. The materials used were nipa (palm used as thatch), wood and bamboo – readily available materials that were used in building houses at this time. This cathedral was damaged by a typhoon in 1582 and then was destroyed by fire just two years later in 1583. The fire began during the funeral mass for a Governor General in the nearby San Agustin Church. The fire burnt that church, and later the Manila Cathedral, the bishop’s residence, and many other buildings in Manila.

The seat of the Catholic Archdiocese of Manila is presently the 6th cathedral to rise on the site since 1581. Previous structures were destroyed by typhoons, earthquakes, fire, and the last war. It was rebuilt on the second half of the 1950s through the efforts of Architect Fernando Ocampo and Archbishop Rufino J. Santos. The cathedral incorporated the stone carvings and rosette windows celebrating the Christianization of the Philippines. Light up with its clerestory. Mosaic artwork decorate three of its side chapels.

The oldest stone church in Metro Manila dates back to 1571. An intricately carved door opens to the church. Of great interest are the Baroque pulpit, molave choir stalls, and an 18th century pipe organ. Like an impregnable fortress, San Agustin has withstood the ravages of time wrought by both nature and by man.

This small jewel-box church is the first all-steel church in the Philippines and in Asia; and the second in the world. Design for the church was finished in 1883 and was prefabricated in Belgium. The completely knocked-down church was shipped backed to the Philippines in 6 ships. It weighed close to 50,000 tons while its stained-glass windows which are intact until now were, according to Father Ceniza, done in France.

OUR LADY OF PEACE AND GOOD VOYAGE
Antilopo, Rizal

Antipolo is known to be the home of Our Lady of Peace and Good Voyage. History says that this miraculous icon has traveled back and forth between Manila and Acapulco eight times and on several occasions was credited with saving her galleon from destruction by warning the people about an impending disaster.

BACLAYON CHURCH
Baclayon town, Bohol
spacer
Located 6 kilometers from the city proper. The church is the oldest stone church in the country, built by the Jesuits in 1595.

DAUIS CHURCH
Dauis town, Bohol
spacer
Located 3 kilometers from the city proper. This is one of Bohol’s beautiful churches, which has retained its Spanish architecture although it has a semi-modern façade.

Located 24 kilometers from Tagbilaran City. The second oldest church in Bohol, built in 1608, with a three-storey convent.

Located 25 kilometers from the city proper. The crowning glory of the Recollect churches in Bohol.

MARIBOJOC CHURCH
Maribojoc town
spacer
Located 14 kilometers from the city proper. This parish was founded in 1768, built in 1798, and fully constructed after 18 years.

This fortress-like church is probably the most popular in this area. Styled in “earthquake Baroque”, its walls are strongly fortified by sturdy posts.

Shrine of the oldest religious relic in the Philippines, the statue of the Child Jesus. A token of friendship by Magellan to Queen Juana in 1521, the Santo Niño de Cebu has survived fires and other catastrophes throughout the years.

MIAG-AO CHURCH
Iloilo
spacer
Located 40 km. southwest of Iloilo City; built in 1768, native façade; a unique explosion of botanical motif reminiscent of Aztec Art. It was declared a national landmark in 1973 and is listed in the UNESCO world heritage list.

SAN JOAQUIN
Iloilo
spacer
This is the only church in the Philippines with bas-reliefs of historic battles set in Tetuan, Morocco, between the Spanish Christians and the Moroccan Moors.

VALLADOLID CHURCH
Valladolid, Negros Occidental
spacer
The size of the church and the convent, which was built by the Recollect missionaries in 1851, support some views that the church authorities during those days were the most powerful in running the affairs of the government all throughout the country.

CHURCH OF OUR LADY OF PEACE
La Carlota City, Negros Occidental
spacer
In the heart of downtown La Carlota, this century-old church is a living witness to the devotion of the predominantly Catholic La Carlotenos. The church has the distinction of one of the very few churches of romanesque architectural design in the province.

BAGUIO CATHEDRAL
Baguio City
spacer
Rising above the city skyline are the pinkish hues of the Baguio Cathedral. The cathedral is but one of religious landmarks which dot the city. There is the Bell Temple, north of the city the Maryhurst Seminary with its brilliant gardens, and Lourdes Grotto with its 252 steps to heaven.

SHRINE OF THE NUESTRA SEÑORA DE MANAOAG
Pangasinan
spacer
The shrine of Nuestra Senora of “Apo Baket” is situated atop the hill. The shrine is known all over the Philippines. Devotees frequent the church especially on Saturdays and Sundays.

CHURCH OF ST. JAMES
Pangasinan
spacer
The church was built by the Augustinians in Bolinao in 1609. It houses wooden “santos,” nowadays a rarity, with the toll of time and the elements blurring their finely sculptured features. The antique size altar is flanked by two grinning, tongue-protruding aztec visages presumably of Mexican influence and brought over by the galleons trade.

ST. MARTIN DE TOURS
Taal, Batangas
spacer
Once the biggest church in all Southeast Asia, it was designed by a Spanish architect-priest and built in the mid-1800s. Taal also possesses a number of other sacred shrines, including the Wells of Santa Lucia, the water of which is reputed to have miraculous healing powers.

SANTUARIO OF OUR LADY OF CAYSASAY
Taal, Batangas
spacer
The image of the Blessed Virgin Mary who is said to be miraculously disappearing from any site where it is brought and appearing at the sanctuary.

BORASOAIN CHURCH
Malolos, Bulacan
spacer
The seat of the Revolutionary Congress where the First Filipino Constitution was drafted and ratified.

DARAGA CATHOLIC CHURCH
Albay
spacer
Built in 1773 by Franciscan missionaries. This is highly prized by art enthusiasts because of its rich baroque architecture. Its very huge structure is considered above-standard. At closer look, it contains archeological relics such as “santos” and religious seals carved articulately on volcanic rocks. These relics are considered priceless and collector’s items.

churches in the philippines people ask

how many catholic churches are there in the philippines,

how many churches in the philippines,

how many catholic churches are there in the philippines?,

how many churches are in the philippines,

when was the baroque churches in the philippines

, what are there no lcms churches in the philippines?,

how many christian churches in the philippines,

how many churches of iglesia ni cristo in the philippines

, how many christian churches are there in the philippines,

how many baroque churches in the philippines

four churches
Baroque Churches of the Philippines. These four churches, the first of which was built by the Spanish in the late 16th century, are located in Manila, Santa Maria, Paoay and Miag-ao. Their unique architectural style is a reinterpretation of European Baroque by Chinese and Philippine craftsmen. learn more here https://whc.unesco.org/en/list/677/

how many evangelical churches in the philippines

how many baptist churches in the philippines